One of the hit sessions at this year’s Impact was not listed in the agenda. A bit like an off-off-Broadway show, it was given to a select few groups. This was the snappily-titled “MQ Workload Distribution in a Sysplex”, given by Lyn as part of the z solution suite activities. It talks about how different systems may process different amounts of work, and how this can be changed to more balanced distribution if you need to.

Since the initial run, she’s been asked to repeat the session for a bunch of customers, and there’s probably more requests than available time. So when she was visiting the UK recently, we took the opportunity to record the session and it is now available on youtube as a three-part playlist. (I quite like playlists, as it makes it easy to replace individual pieces without modifying the published URL.)

END_OF_DOCUMENT_TOKEN_TO_BE_REPLACED

Now that Impact is out of the way, we are getting to the next round of the Hursley Comes To You and the Connectivity and SOA Summits. This time covering Europe (or countries that IBM seems to think are part of Europe).

And this blog is apparently partly responsible for one of them: the Paris event was requested by someone who had read my writing about the US events. And we were able to oblige.

The agendas are slightly different at each event, depending on the expected audience.

But I know that at Paris we are planning to include some deep-dive technical subjects. It will be done in English – sorry, but my French isn’t up to discussing performance tuning. Hopefully that will be OK. I’m looking forward to doing that one as I’ve not been to Paris for many years. Going to see if I can get the train over.

When I have an early weekday flight from Heathrow, I often stay at one of the nearby Hiltons the night before. It’s convenient, not outrageously expensive (especially with points), means I don’t have to get up at 4am to drive up the M3, and I can get a good breakfast in the lounge before going over to the terminals.

So I was doing that last night, checked in, went to check my email, and the laptop power supply went “pop”. No charging possible. I tried a new cable in case it was the fuse, tried different sockets, but it was clear that something was broken. Not a good thing to happen when you’re about to be away for a week with no real hardware support.

END_OF_DOCUMENT_TOKEN_TO_BE_REPLACED

The Impact conference starts in 10 days in Las Vegas. For the speakers that means we need to finish up writing presentations, although that seems to happen later and later at each event.

Many conference regulars will be there: myself, Lyn, Morag, Ralph as well as executives and some others who aren’t allowed out in public so often, and  the marketing people. As always, this is a busy week not only for the public talking but also the stream of meetings that we participate in. Going to Vegas is not a jolly, and there’s often attempts to NOT be sent.

There used to be a much stricter deadline for finalised presentations, as material was only distributed in physical formats. So it had to be submitted several weeks in advance.For some subjects that was fine, but it made it harder to deal with late-breaking changes, such as if an expected product announcement was cancelled or a new feature altered its implementation.

I was digging through my cupboard a few weeks ago and found the book of presentations from the 1998 MQSeries Technical Conference in Washington DC – properly published and bound. Very nice, but heavy and for those of us who try to fly with only hand-luggage a bit awkward. Back then, we also often used boxes of real acetate foils, carefully separated and hopefully kept in order; there was no guarantee of projection systems even if we had laptops with us. (That DC event has special memories for me, though it’s not why I kept the book.)

It’s interesting looking back at that old material. Features of MQ that were considered interesting or exciting but which are no longer used; and the converse, features that are still critical to customers. Here is the MQSeries V5.0 presentation from 1997/1998 as an example. The “web admin” feature is long gone in that form, as is the DCE Directory Service support. But transaction coordination is still very heavily used.

Although we try to predict which features are going to have a long-term value when planning new releases of MQ, these “What’s New” presentations do show where we got it right and where we didn’t.

A good number of customers and IBMers are here at the University of Minnesota to hear about our latest connectivity products. And that’s despite some horrid weather.

I’m sure the city tourist agencies don’t like this, but when we’re doing the HCTY gigs, one of the first things we think about is “how easily will we get out of this place.” There’s no time to enjoy the places we go to; we just have to be ready to get to the next location.

And on this batch of locations, so far, we seem to have been too-closely followed by snow and ice There was an ice storm in Bentonville that disrupted many of the flights in and out of town on both the night before and the day after. And now in Minneapolis there’s been a huge dump of snow. At least they are used to it here, and the flights (mostly) look OK for getting to Colorado.

The MQ V7.1 and V7.5 book from which the new Primer was extracted has now completed its journey through graphics design and editing and is available here in pdf, epub and (in a few days) hardcopy. Thanks to those people who provided comments on the draft.

A couple of the other authors wrote about their experiences in this blog post. 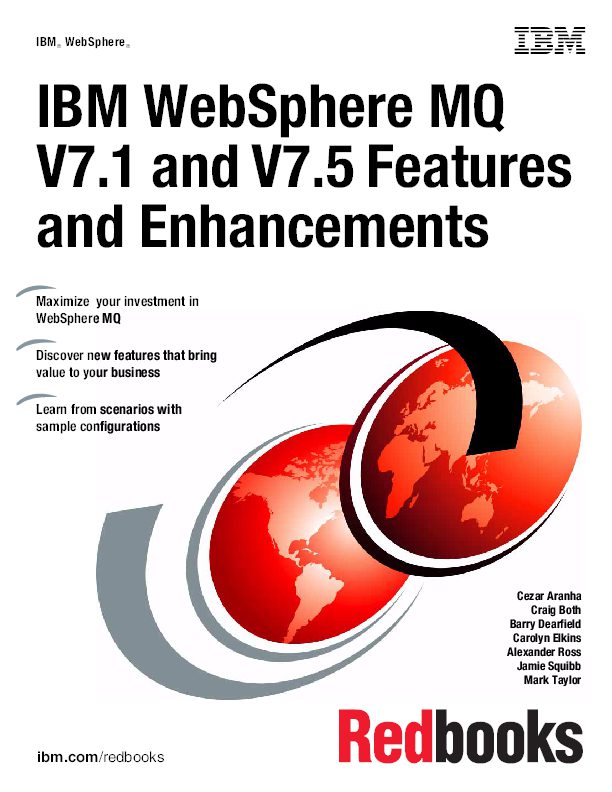 After MTBF and MTTF, I came across a new related concept here.

The MQ Primer discussed here and here has completed its journey through the editing and production process, and is now available at http://www.redbooks.ibm.com/redpieces/abstracts/redp0021.html

Downloads are available in both PDF and EPUB format. You can also use calibre to convert to mobi format for Kindles.